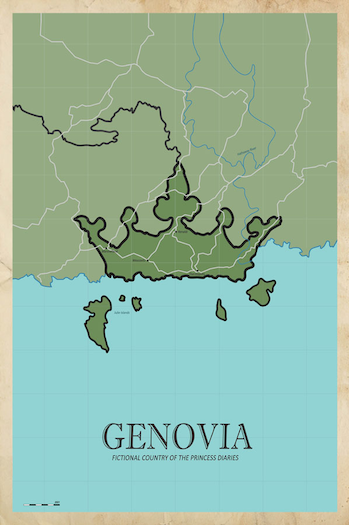 The only country with a Napoleon complex.
Image

. Used with permission.
"I assumed that Aldovia—like Genovia, the fictional country from The Princess Diaries, and like the location of essentially every other princess movie since Grace Kelly—was basically just a version of Lichtenstein or Monaco, a small but fascinating accident of history subsisting on some combination of high-end vacationer money (maybe skiing?) and tax laws very favorable to either the super-wealthy or multinational corporations, or both."
— Kelly Faircloth reviewing

A Micro Monarchy is the setting (or a mentioned location, or a background for a character) used for a tiny (and usually, but not always, modern) country, that is under a monarchy, albeit usually a liberal, modernized one.

If the monarch has the title of Prince, it's called a Principality. The prevalence of micro monarchies as principalities is probably because of the Holy Roman Empire and All the Little Germanies, in which many of the smaller German monarchies (thus "micro monarchies" in their own right) were ruled by princes rather than kings. Perhaps because of this history, unlike English the German language has separate words for a prince who is a monarch in his own right ("Fürst") and a prince of who is merely the son or grandson of a monarch ("Prinz").

The make-up of the country will include ancient castles that are juxtaposed with modern day architecture of the surrounding buildings and — if it's a European state — the typical modern European car. Despite its size, it will usually have a decent economy, often based around one product that it is known the whole world for, or massive tourism to its historical sites. The nation's defense forces will only consist of ceremonial knights, palace security, and local police, and they will rely on some more powerful neighbor for defense.

If they ever are attacked in earnest and their neighbors let them down (or, even worse, the neighbors are the attackers), expect it to be easily conquered, with its inhabitants becoming either dead or oppressed, or, if they fare better, members of La Résistance. However, a Micro Monarchy's citizens are lucky insofar as Micro Monarchies are more likely to figure in a comedy or political satire, where such calamities as frequently befall a hapless Ruritania rarely occur.

This sort of setting has a tendency to be inherited by a long lost princess who has never even heard of the place before.

Compare and contrast with Land of One City, which may or may not be also a Micro Monarchy; as well as Ruritania, which is just a fictional Southern, Central or Eastern European country, Qurac which does the same for the Middle East, and Bulungi which covers Africa: All these can be Micro Monarchies too, but don't have to. Also tends to be The Good Kingdom.