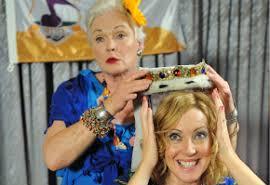 Micro Nation is an Australian comedy series following the goings-on of the tiny city-state of Pullamawang, which became its own country after they "forgot to send in their paperwork" during the federation of Australia in 1901. Kingess Betty Cosdosca is the childish, ditzy, perpetually clueless and financially irresponsible supreme ruler of 'Pully', joined by her long-suffering daughter Princess Emma, her non-royal consort Paul, her Royal Cabinet, the two-man police/military and an ample supply of feather cannons.

The Kingess has decreed that the following tropes apply: