Between Germany and Belgium, so nice.... Currently
Luxembourg, officially known as the Grand Duchy of Luxembourg (Luxembourgish: Groussherzogtum Lëtzebuerg, French: Grand-Duché de Luxembourg, German: Großherzogtum Luxemburg), is a very small — about 1,000 square miles — and entirely land-locked country in Western Europe. Less than half a million people live there.
Advertisement:

History, though, was unkind: it stands at the border of the French and the Teutonic worlds — and it sucks to be stuck in between (just ask Belgium). French, German, and the local Letzeburgisch (a bit Dutch, a bit German, mostly Letzeburgisch) are all spoken less on the grounds of "ethnicity" than by everyone at different times and situations.

Luxembourg was part of the Holy Roman Empire, then Napoleon's Empire, and finally the Kingdom of the Netherlands (and simultaneously the German Confederation). When Belgium left the Netherlands, Luxembourg stayed, but now it was stranded and it integrated its economy with that of Germany. Nevertheless, it was a poor country and many people headed for America.

Then Otto von Bismarck took over in Germany, and his Germany was anything but lame-duck. He had no interest in allowing the Dutch king to participate and he kicked Luxembourg out. The French offered to buy it up and the Dutch said yes. Bismarck said no, demanding a neutral country (so the French couldn't invade Germany that way). Four years later, France learned that you don't cross a chessmaster extraordinaire.

Forty years later, Luxembourg learned once again that being where it is sucks when Germany invaded (and had they not, the French, documents show, would have done so instead). But Luxembourg got off better than Belgium: their comically miniscule army was captured without loss of life by the Germans before war could be declared, and so the Germans legitimized their position by claiming that absolutely nothing had happened, allowing the civilian government to continue. Yeah right. In practice, Luxembourg was ruled as a German rear garrison with a permanent population, with all effective power being held by the military. Luxembourg was to be asked to join Germany (at gunpoint) after German victory. Thankfully for Luxembourg, this was not to be, especially since — in large part because of German highhandedness — Luxembourg became culturally and politically estranged from Germany while defining itself as a free, independent, constitutional monarchy.

The Nazis weren't so civil and didn't like this one bit. Luckily, they lost, too. Since then, Luxembourg has been independent and filthy rich, having the highest GDP per capita in the world at around $108,000, compared to USA's $47,000 (though the cost of living is a bit high, so by purchasing power, it's actually second after Qatar at $80,000, but still ridiculously high). And with France and Germany having sorted their thing out, today it's actually a real nice place to be. It was a founder member of the European Union and uses the euro as its currency.

Luxembourg is a constitutional monarchy: the Grand Duke is currently Henri I. The Prime Minister is currently Xavier Bettel.

It has no navy (the no coast thing is a bit of a problem) and an army of c.450 people. Its air force consists of 17 AWACS planes, three trainers and a cargo plane, all bar the last NATO aircraft registered with the country for convenience purposes. That said, it does do peacekeeping a fair bit (when you're surrounded by allies, you don't need to worry too much about keeping troops at home).

One of the most famous things from the country is a long-wave (later medium-wave) radio station called Radio Luxembourg. This began in 1933, during a mini-boom in European stations that broadcast commercial programmes to Britain in defiance of the BBC's non-commercial monopoly. During World War II the station fell under Nazi control, but an engineer had hidden some transmitter parts to prevent it broadcasting at full power.

After the war ended there was some discussion about potentially using the Luxembourg transmitter to relay anti-communist programming from London, but this plan was foiled by the change of British government and in 1946 Radio Luxembourg resumed commercial operations.

From 1946 until 1973, Radio Luxembourg was the only English-language non-BBC radio station (not counting Radio Caroline and other pirate stations) that could be picked up in the UK. In the mid-1950s it switched to medium-wave and could only be heard at night. Its pop music station, Luxembourg 208, played on the fact the BBC Radio One only broadcast "part-time" and surrendered its airwaves to the far less hip Radio Two at seven p.m. every day. 208 started broadcasting at 6:45 every evening. Many shows were pre-recorded in London.

By the early 1960s most of the station's programming consisted of record shows sponsored by various labels (all of them owned by just four companies), but the advent of pirate radio forced Luxembourg to adopt a more conventional top 40 format.

Luxembourg and Luxembourgers in fiction 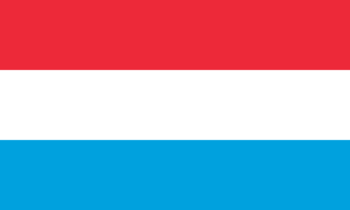 The flag was first introduced during the Belgian Revolution, and its red-white-blue color scheme is similar to that used by the Netherlands, though with the red and especially the blue having a lighter shade.
Coat of arms of Luxembourg 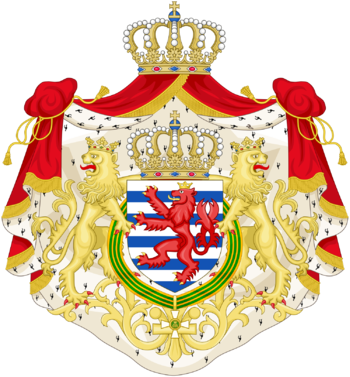 Where the Alzette through meadows flow,
And pebbles the Sauer mow,
Along the Moselle bloom the vines,
As Heav'n gifts us wine:
This is the land, for honour whose,
No ordeal proves too great:
Our homeland which could never lose,
Our hearts' rank and rate.
O Thou above, who night and day,
Guides nations with thine own hand,
Guard this, our Luxembourger land,
From alien yoke and pain!
As children, thou us bestowed,
A spirit, free, unbowed,
Let once more freedom's sun,
For now and all time glow!
Government Miscellaneous