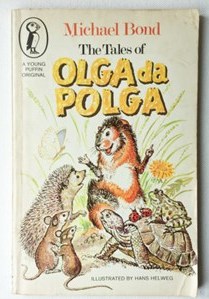 And now to tell you about some tropes my human owners know about...
Olga da Polga is a guinea pig created by Michael Bond. She is a guinea pig noted for telling tall tales in the style of Baron Munchausen (re-tellings of events that her human owners get up to).
Advertisement:

It was popular, but not quite as popular as Paddington Bear.