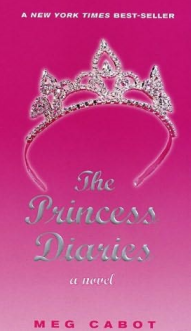 The Princess Diaries is a Young Adult book series by Meg Cabot following the exploits of Amelia "Mia" Thermopolis, a teenager who goes to Albert Einstein High School and lives with her strongly liberal single mom. Her life changes drastically when her father comes for a visit. After being treated for testicular cancer, he is no longer able to have children. Because of this, he finally tells Mia a secret he, her mother, and her grandmother ("Grandmere") have been keeping from her for years: he is really the Prince of the fictional principality of Genovia. Because of his illness and treatment, Mia is now Her Royal Highness of the country and the heir to the throne of Genovia.

Upon first hearing the news, Mia objects to the idea of having to become a princess and having to rule over Genovia. She also fears that this new status will make her an outcast at her school and would rather just be a normal teenager. The series follows Mia as she slowly adjusts to becoming a Princess and comes to terms with the idea of being a ruler.

In 2001, the first book was adapted into a movie starring Anne Hathaway and Julie Andrews. It was followed by a sequel in 2004, The Princess Diaries 2: Royal Engagement. Both movies have a large number of changes from the novels, with the second not resembling any plot points from any of the books with the exception of Mia's mother marrying her teacher and having a baby with him.

In 2015, Meg released two spinoffs: Royal Wedding, which is an adult novel that follows Mia as a 25-year old, and From the Notebooks of a Middle School Princess, which follows Mia's recently revealed half-sister.

As of 2020, Meg is updating her online blog to show how Genovia is handling the pandemic. Mia has to work in tandem with the prime minister to protect the kingdom.

The core series (not including Middle School Princess) consists of:

Tropes in the books include:

Tropes for Royal Wedding include:

Tropes for the Corona Princess Diaries Include: