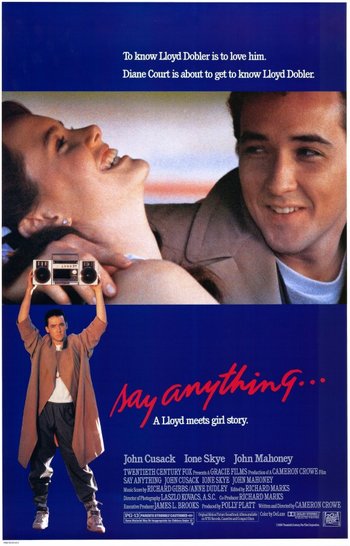 "I am looking for a dare to be great situation."
—Lloyd Dobler
Advertisement:

Say Anything... is a 1989 High School romance starring John Cusack and Ione Skye. It was the directorial debut of Cameron Crowe, who also wrote the screenplay.

Lloyd Dobler (Cusack) is an unambitious C student who pursues valedictorian Diane Court (Skye) after graduation. They fall in love, but unfortunately, Mr. Court (John Mahoney) doesn't approve of having this slacker in his perfect daughter's life.

AFI named this as one of the Top 100 romantic movies of the last hundred years, and Roger Ebert considered it the greatest romantic movie made since 1980. There's a well-known scene from this film where Dobler holds a boombox playing Peter Gabriel's "In Your Eyes" over his head. Contrary to what you may have heard, this does not win her back, but that scene has become almost iconic. Also, there's some stuff about the IRS investigating Mr. Court for embezzlement.

Not to be confused with the emo band of the same name.