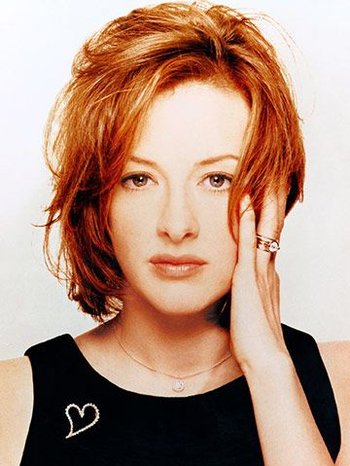 Joan Mary Cusack (born October 11, 1962 in New York City, New York) is an American actor and comedian. She is known for a wide variety of roles spanning a career over thirty years. Often plays the Plucky Girl, and frequently appears alongside her brother, John Cusack. Her sister Ann Cusack is also an actor.

Like Robert Downey Jr.., Anthony Michael Hall, and Randy Quaid, Cusack was a Hollywood actor who was a cast member during Saturday Night Live's 11th season in 1985, which was met with such negative reviews and weak ratings that NBC threatened to cancel the show (instead, Lorne Michaels just fired her and everyone elsenote though Danitra Vance quit because she was sick of being put into stereotypically black female roles, Dan Vitale left because he had drug problems, and Damon Wayans was fired for going off-script in a sketch by playing a police officer who was Camp Gay, except for Jon Lovitz, Nora Dunn, Dennis Miller, Al Franken, and A. Whitney Brown). Cusack's only recurring character was Selina, an awkward girl who was in love with a mentally-challenged man named Biff (Jon Lovitz) and her celebrity impressions included Jane Fonda, Brooke Shields (with token male homosexual cast member Terry Sweeney as Brooke's mother, Teri), and Queen Elizabeth. Cusack also appeared on Weekend Update desk as a movie critic in March 1986 to argue that Sydney Pollack's film Out of Africa wasn't funny, citing Midnight Cowboy as a much more successful comedy. It should also be noted that Cusack's birth date of October 11th is also the day that Saturday Night Live premiered in 1975 (Cusack was born in 1962, meaning she would have been 13 years old when the show first came on).

Some tropes associated with her work include: