Film / Married to the Mob 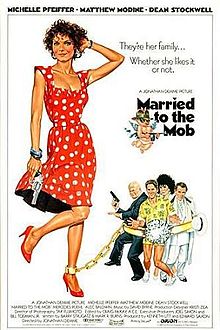 Angela de Marco (Michelle Pfeiffer) is sick of being a mafia wife; she's sick of everything she owns being "hot," she's sick of having to be friends with the other mobsters' wives, and she's sick of her misogynistic douchebag of a husband, Frank (Alec Baldwin). Then Frank is bumped off, and suddenly his boss, Tony "The Tiger" Russo (Dean Stockwell) wants to get in her pants. And so, she takes her son and moves to the city, but Tony won't leave her alone, and neither will his psychotic wife. She does meet a nice guy named Mike Downey (Matthew Modine), but he turns out to be working for the FBI, who think she had something to do with her husband's death.

On a fun trivial note, this movie marked the world premiere of Dark Wave artist Q Lazarus's song "Goodbye Horses", later made famous by its inclusion in The Silence of the Lambs, also directed by Demme.

Not to be confused with the clothing line of the same name.