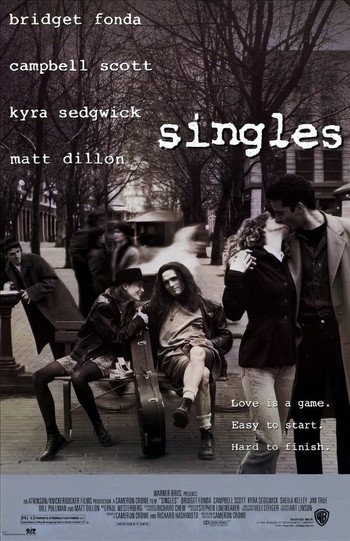 A 1992 ensemble romantic comedy written and directed by Cameron Crowe and set in Seattle, Singles is a loving time capsule of the city's Alternative Rock/Grunge scene of the early '90s.

Steve Dunne (Campbell Scott) meets Linda Powell (Kyra Sedgwick) at a club, and they hit it off. The ups and downs of their relationship are contrasted with those of Steve's friend (and ex-girlfriend) Janet Livermore (Bridget Fonda), who is increasingly frustrated with how aloof her boyfriend Cliff Poncier (Matt Dillon), the leader of a proto-grunge band called "Citizen Dick", acts towards her. With some running threads about other friends, the film shows the ups and downs of relationships for Generation X in the pre-dot-com era.