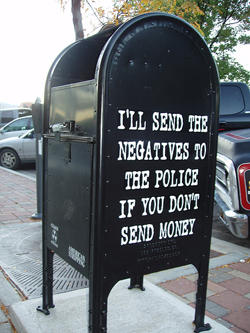 Mailboxes have never been this threatening.
Devil Bat: First, you find someone who has a blackmailable secret!
Hiruma: "Hey, if you don't want the world to know, then find some dirt on someone else!"
Devil Bat: Blackmail the person to become your slave, then use the data to blackmail someone else!
Hiruma: It's a Devil's Pyramid where slaves bring forth more slaves!!
— Hiruma (the god of blackmail), Eyeshield 21
Advertisement:

Alice knows something that Bob doesn't want anyone else to know. So Bob has to do something for Alice so that she doesn't tell anyone.

In a teen comedy, a character is blackmailed by someone outside the main cast, and the others find out and stick up for their friend. In a Government Procedural, a respected politician is confronted with pictures of them in a strip club or with a girl twenty years too young for them, and is asked for hush money. In a Super Hero story, the hero is blackmailed when someone discovers their Secret Identity. In a Sitcom, a child blackmails their sibling when they break a rare, expensive heirloom or when they have an Embarrassing Old Photo (or even knowledge of something personal, such as their diary).

The possibilities are endless. To list all the variations and permutations of this trope here would be a lesson in madness. Blackmail is such a key plot device, so intrinsic to the art of storytelling and human nature, that it is used by almost every series at one point or another. Sadly, it's very seldom these days that a blackmail resister (themself a rare animal) does so with the traditional response, and in real life usually effective

One of the many ways of making someone An Offer He Can't Refuse. When coupled with Sinister Surveillance, this can become Paranoia Fuel, hence the potency of Big Brother Is Watching.

Of course, it's rarely stated as such, because "Blackmail" Is Such an Ugly Word.

While the words 'blackmail' and 'extortion' are used interchangeably, this is not strictly true. "Extortion" is the broader category in legal terms, consisting of "obtaining money, property, or services from another person through coercion." "Blackmail" is a specific type of Extortion where the threat is "to reveal information that is potentially embarrassing, socially damaging, or incriminating about the victim or their family member(s) unless a demand for property, money or services is met." For example "I Have Your Wife hostage, give me the MacGuffin or she is done for" would be extortion, however, "I have pictures of you/your loved one committing a crime, give me the MacGuffin or your/their reputation is toast" would be blackmail. One side note is that the word originally did in fact mean simply extortion; rent or taxes was called "mail" in Scotland therefore taking it illegally (by threatening to burn down a neighboring clan's huts for example) was blackmail. The modern meaning shows how language evolves.

Also note that blackmail is an inherently dangerous activity. Informing someone that you know too much is quite rarely the best course of action, especially if Agatha Christie is holding the pen or you haven't told anyone else (but don't tell too many people, as that would, of course, defeat the purpose of blackmail). The danger (along with the potential stupidity) is compounded if the intended victim of the blackmail is already a murderer. After all, if they've already had sufficient reason to kill at least one person, is it very likely that they'll baulk at murdering another — especially if that other person is trying to squeeze them for money?

Compare Blackmail Backfire when the blackmailing fails for some reason.

Not to be confused with film of the same name by Alfred Hitchcock.

The Flim Flam Brothers catch Twilight sneaking into their office and use it as leverage against her.

The Flim Flam Brothers catch Twilight sneaking into their office and use it as leverage against her.