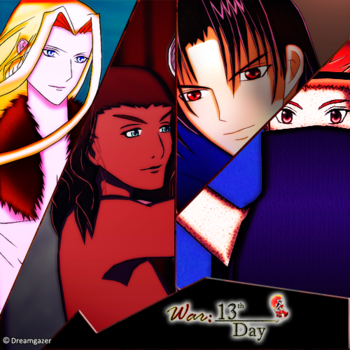 Don't be fooled. This isn't your typical Dating Sim.
"Anyway, who do you want as your storyteller? Me or this prude?"
-Wildfire to you
Advertisement:

Something is wrong here.

You stumble across two women at a campfire. Wildfire is an Action Girl and a Valkyrie, who you might be forgiven for mistaking as a man from behind. Ambrosia is a member of The Phoenix, an exotic lady in red who you might recognize from the Death Room.

They're talking about the sun having vanished and, for whatever reason, Ambrosia keeps counting down from 3. Huh?

Okay, it'll all make sense once you hear their explanation, right?

Ambrosia tells a story that starts like an epic and ends like a love story with Arsenik the gentleman, except that it comes with a supernaturally creepy stalker. Wildfire tells a story about going from Friends with Benefits with Chase the Nice Guy to a Violently Protective Girlfriend or, depending on your choices, a steadfast supporter of chicks before dicks.

Now, the question is...why don't their stories line up?

aptly puts it, "it's your job to make like Miles Edgeworth and solve this mystery to figure out what is really going on."

Created by Dreamgazer, War: 13th Day uses every aspect of the Ren'Py Visual Novel engine to engage you in an interactive mystery full of plot twists, mind screws, and unconventional romance arcs. Serving as the opening act to War (X Playing Pieces)

, it's available for free on itch.io

. If the Jigsaw Puzzle Plot boggles you, don't be ashamed of using the official walkthrough

Since its release on New Year's Day, it has spawned a Valentine special

and an April Fools' one

The following tropes can be found in War: 13th Day -

No one saw you, did they?