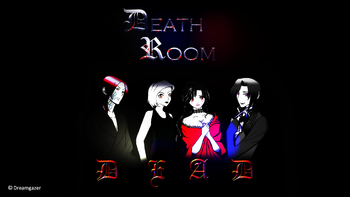 Don't get too attached.
Can you escape the Death Room?
-from the official website

You wake up in a white room with countless weapons and four strangers – the brooding Anti-Hero with tsundere tendencies, Dev Hanshin; the chatty and outgoing Plucky Girl, Evie Olive; the sweet and elegant lady in red, Ambrosia of the Phoenix; and the Handsome Lech, Dominic Eld.

Is this the work of a kidnapper? Some twisted Batman Gambit? Or is it All Just a Dream?

Through a bucket-load of choices, you can search for the answers to your bleak situation, get to know your roommates and, most of all, try to escape alive.

Originally released for Halloween, this Ren'Py-based English Visual Novel closely follows the Gamebook format and serves as a short introduction to the rest of Dreamgazer's games

. It can be downloaded for free on itch.io

. The walkthrough can be found on the official blog here

But was it really worth it?