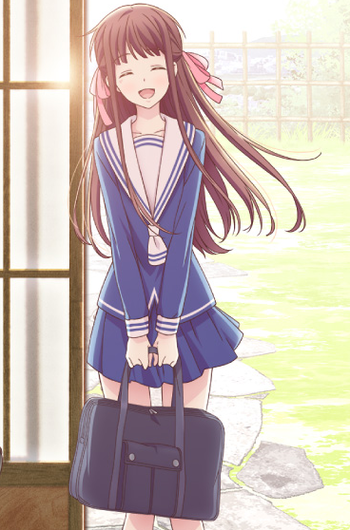 Sweet, hardworking high schooler who gets involved in a love triangle and comforts a cursed, dysfunctional family with her powers of love and friendship.
"I was so happy when you smiled
Your smile breaks through the clouds of grey
Far from the sunny days that lie in sleep
Waiting with patience for the spring
When the flowers will bloom renewed again
Knowing there's more beyond the pain of today
Although the scars of yesterday remain
You can go on living as much as your heart believes..."
— "For Fruits Basket", Fruits Basket opening theme (2001)
Advertisement:

A type of protagonist that appears often in Shōjo Demographic works.

They're almost Always Female and a Kid Hero between 10 and 16. Girlish Pigtails or bob cuts are their common hairstyles, but just long hair worn down is common as well. Hair colors are usually blonde, red, pink, or brown, while blue eyes or brown eyes are the most common eye colors. They will typically wear brighter colors, such as pink, when in casual attire (especially if they're a magical girl), and it's common for their school uniform to be a Sailor Fuku.

The protagonist will often be an Ordinary High-School Student (or a Junior High school student). She's not the most perfect person, but she tries her best. She's clumsy and simple minded, but makes up for it with her sweetness and energy. She's often (supposedly) average looking in physical appearance, however this might be poor self-esteem and other characters will try and get her to see her beauty. Though she's not usually as much of a Big Eater as her shonen counterpart, she can sometimes be quite gluttonous, especially when it comes to anything sweet.

But this incredibly average hopeless romantic is secretly the best hope the world has at wielding some great power that she stumbles into, or was born with all along. She'll often find herself in the middle of conflicts through no immediate fault of her own. Everyone wants a chance to grab her whether it be for political reasons, for that hidden power, or because she has that special "something" all the boys can't ignore. She won't be pushing the action, but she'll sure react to it.

Her strength, unlike her literary brothers, is often not physical at first. Rather, what sets her apart is her incredible willpower and loyalty, which inspires friends and potential lovers alike to protect her. And rest assured, this girl will be the emotional rock of the series. When all else fails she will finally unlock her potential through The Power of Love, and bring her foes down with kindness. She lets them see the error of their ways, and basks them in the light of the bond she shares with her friends and lovers. Those who finally understand will be redeemed, but others may be destroyed by the overwhelming positivity or sheer pluck. She's often The Heart or All-Loving Hero of her Four-Girl Ensemble. Being prone to Tender Tears is common.

When it comes to romance she almost always falls in love with someone older than her (usually a Sempai), who is also One Head Taller than her. They will usually bump into each other, especially if the protagonist is Late for School while eating Toast of Tardiness. If the protagonist is tender enough, the duo will often be a Brooding Boy, Gentle Girl combo. If the protagonist favors pink then her love interest will often wear blue (even if female). Being unable to confess, being stuck in a pre-dating stage for most of the series, and being self conscious will often be included. She might have a childhood friend who likes her, but she is Oblivious to Love. Having at least one Pseudo-Romantic Friendship is exceedingly common. If their friendship makes the leap to something more, expect the protagonist to be an uke if that trope is in use. Romance Games and video games with a female audience usually have this kind of heroine as the protagonist, which makes for easier self insertion.

Usagi Tsukino (herself an Affectionate Parody of Magical Girl heroines) from Sailor Moon is a common inspiration for modern Shoujo protagonists, especially in Magical Girl series. For characters who base much more than their personality on Usagi, see Sailor Senshi Send-Up. More mundane series will also take inspiration from Tsukushi Makino from Boys over Flowers.

The Distaff Counterpart to the Stock Shōnen Hero (another Book Dumb All-Loving Hero with The Power of Friendship, but who is usually more Hot-Blooded). Contrast with the Stock Shōnen Rival and the Stock Light-Novel Hero (who are more seriously-minded cool customers).