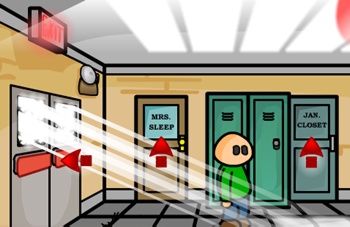 Sweet, sweet freedom... is what he'll have as soon as he gets that door open.
"Now THAT was A SHARP idea! (I can't believe I said that.)"
— Phil Eggtree
Advertisement:

Riddle School is a Newgrounds flash game series created by Jonbro (now known as Jonochrome) following a boy named Phil Eggtree trying to escape numerous grades of school, and later on, a number of environments.

The game is inspired by Tom Fulp's Pico's School, which is the reason the first game is a point-and-click adventure game which takes place in an elementary school, Though there are considerably less guns here; Riddle School opts to follow a relatively less extreme story by having the main character not shoot up the place and instead just try to get out of school through some strange puzzles.

Riddle Schools 2, 3, and 4 have practically the same mechanics to the first and follow a very similar plot line with our titular main character finding his way out of middle school, high school, and college, respectively. Riddle School 5 changes the stage from school to an alien space ship in an unexpectedly complicated series of events. Riddle Transfer sets up the stage to a sequel series of games by JonBro; the series's original plans were scrapped, but it ended with its second installment on May 25, 2016— the first game's tenth anniversary.

Later Jonochrome made a Riddle School Legacy edition of all of the games that makes the games easier.