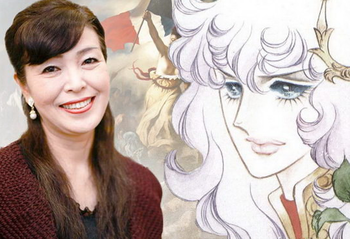 Riyoko Ikeda, next to the protagonist of The Rose of Versailles.
Advertisement:

Riyoko Ikeda (池田 理代子 Ikeda Riyoko, born December 18, 1947, in Osaka, Japan) is a Japanese manga artist and singer. She is included in the Year 24 Group: a group of female mangaka that became pioneers in the fields of manga, bringing up aesthetic and plot-wise changes in their works as well as opening the path for the appearance of female manga creators in general (other members are Moto Hagio, Keiko Takemiya, Yasuko Aoike, Yumiko Ooshima et al.)

Ikeda was one of the most popular Japanese comic artists in the 1970s, being best known for The Rose of Versailles. She worked for the Shueisha group, with almost all of her works published in the shoujo magazine Margaret. After The Rose of Versailles concluded, Ikeda wrote articles for Asahi Shimbun. In the 2000s, Ikeda studied at a music school and became a singer. Her voice is in the soprano range. She made a comeback to the comic industry as a scenarist in 1999.

Some of Riyoko Ikeda's works are: