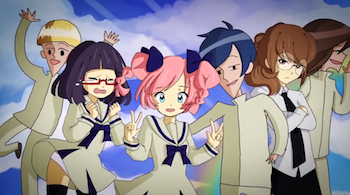 The title screen.
Oh, no, I'm late for school again!
There's no time to eat my toast!
I met a cute boy
Light Chocolate Life Love
— The Opening Theme

(Olivia Bergström and Eric Bradford). It is an Affectionate Parody of anime tropes, specifically those found in the Shōjo Genre.

15-year-old Tsumiki Domen is your everyday pink-haired Ordinary High-School Student. In her rush to get to class on time on her first day of high school, Tsumiki bumps into a handsome boy known as Hero-Senpai. Feeling guilty about the encounter, Tsumiki later goes looking for him to apologize and ends up stumbling upon the Senpai Club, a club full of handsome and charming men (and one woman). However, the club members have no interest in attracting the attention of women, instead having created the club to learn about how to avoid women. Hero-Senpai, though, just can't help but feel an instant attraction towards Tsumiki.

Episodes of Senpai Club can be found on makebabi.es's