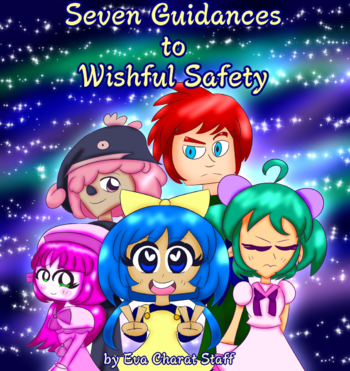 Poster for the series. From Left to Right: Reparo, Subiko, Cynaiya, Armix, and Mellory
Seven Guidances to Wishful Safety is a five-episode YouTube Fanime created by Eva Charat Staff

. It's about five heroes from different realms are called to collect what is left of this being called "The Guidance", after it was split apart from a giant sword. Regardless what motivation they would have, they are determined… to obtain the seven guidances
Advertisement:

Unlike most YouTube fanimes (though, like with most of the work the creator has done), this one is done in the style of a Visual Novel (with some actual animation here and there.. mainly for that battle scenes.).

You can watch the series here.