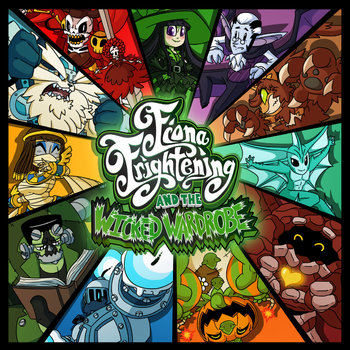 "We face our fears! Now face our might!" note  Clockwise from the top: Fiona Frightening, Draphael, Whiskers, Laguna, Golemmy, Jack-O-Laugh, Sir Waxworth, Francis, Princess Mumma, Isen, and Los Lobones (with Carmen)
Witches, bats, bones and cats
Hope you're not afraid of that
Mummies, pumpkins, Frankensteins
All these scary things you'll find
Inside a world within a book
Come on in and take a look
You'll find the Creeps the best of chums
Advertisement:
But something wicked this way comes!
-From the theme song

Fiona Frightening and the Wicked Wardrobe was a Halloween-themed 3D Platform Game being developed by Alexander Tansley and Azurous Studios.

Ten-year-old Fiona Frightening is a girl who loves all things creepy and spooky, especially when it comes to her favorite bedtime story. The storybook tells the tales of the Creeps, a group of quirky and friendly monsters, and their exploits in Wickedopolis against the evil Boogeyman. However, the Boogeyman has become sick of always being thwarted by the end of the story, and has ripped the pages from their binding to rewrite the plot for his own ending... Now, Fiona must enter the world of Wickedopolis and take up the mantle of the Legendary Witch in order to recover the torn Golden Pages, defeat the King of Nightmares himself, and restore everyone's Happily Ever After.

This is where the Wicked Wardrobe comes into play. The Wardrobe is a mysterious item that has the power to not only safely house the rescued Creeps, but transform them into magical outfits called Monsdresses, allowing her take on their abilities, enhanced by her own witch magic.

The voice cast is notable for having several big Internet personalities on the team as the main characters, including (but not limited to) Anthony "Antfish" Sardinha, Scott "KaiserNeko" Frerichs, Curtis "Takahata" Arnott, and Corinne "Megami33" Sudberg of Team Four Star fame, as well as Alex "The Autarch" Rochon and Lewis "Linkara" Lovhaug.

. Also, Dr. Crafty - a webshow also by Tansley - covers the most recent designs of the characters and showcases (most of) their voice actors in episodes 9 through 12, the first of which can be viewed here

Unfortunately on September 19, 2018, Tansley announced that due multiple problems, development is halted for the indefinite future

, with episode 62 of Dr Crafty outright referring to the game as cancelled.

Tropes held within the pages include: