This page contains unmarked spoilers for Dr. Crafty's storyline. You Have Been Warned. 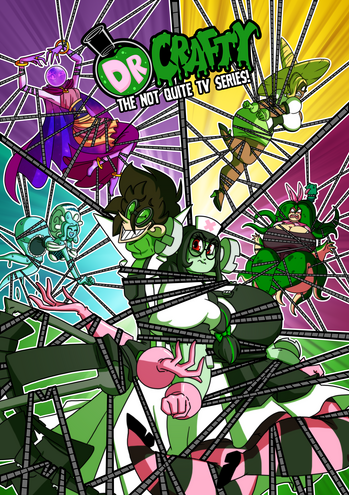 is a weekly speed-art YouTube series created by Alexander Tansley, a DeviantArt title card artist known for Atop the Fourth Wall, Positively Dreadful, and various original pieces of art.

Deep within the Florida Everglades, the titular Dr. Crafty and Nurse Worse, his assistant, kick off a speed-art channel to help promote Crafty's artwork and hopefully make some money. Crafty is passionate about his interests but laughably egotistical, while Nurse is peppy and tries keeping things under control despite her waning patience. Unlike most other channels of its kind, Dr. Crafty has a unique twist: as the footage plays out, the characters actively commentate on the piece and provide relevant information about the work. The subjects can range from original creations, commissioned artwork, or fan art. To complement the informative commentary, the two also partake in some riffing and wacky shenanigans. Zany gags, various memes, open praise and critique, characters from other works who appear and interact with the Crafty Crew, Crafty's voluminous ego, and Nurse trying her hardest to keep the show together are all commonplace.

Typically, episodes are released weekly under a particular monthly theme. Each theme lasts four episodes—and, starting with Season 2, one episode of each spin-off series, whose contents function as additional segments for the main show. With those spin-offs comes a new character to help Crafty host them. They are listed here in the order they were released:

The show also gives insight on the behind-the-scenes stories of the characters involved. From the weird situations with characters from other works to their fundamental personalities, the Crew's lives turn out to be not much different from what is shown in the art-commentary segments. They’re less actors and more internet personalities. Thus, there is great focus on how the Crewmates' interpersonal chemistry improves over time. As it does, the mysterious pasts of Crafty and Nurse are both gradually uncovered, and key figures within them continue affecting everyone in the present day. Crafty's strained relationship with a deity is given much focus; from that is Nurse's equally strained relationship with a (genuine) mad scientist and her minions, who are obsessed with the show and its connection to said deity's species. Yet, despite the threat of their antagonists' ambitions looming over them, their occasional bickering, and some individual insecurities, the Crewmates seek to persevere and continue focusing on their production. They always value each other no matter what and will always find time to get crafty, whether it be for their own benefit or their audience's.

In the latter half of Season 4, Dr. Crafty started advertising its then-upcoming sister show, CrafD&D, an indirect spin-off of the show in which Crafty plays Tabletop RPGs with friends outside of his Crewmates. It officially started in February of 2022, and elements of both shows continue bleeding into each other.

The show has an official website that you can visit here