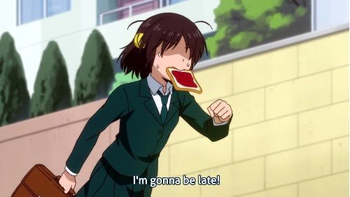 "Now, like shonen manga, there's only one story that really works for shojo manga!! ... The heroine screams "I'm late! I'm late!" while running out of her house (because she's clumsy)!! There are no alternatives to this beginning!! Another important detail: she has to be chewing on a piece of toast!!"
— Even a Monkey Can Draw Manga
Advertisement:

The Ordinary High-School Student protagonist is Late for School. They don't have time to sit and eat a full meal so they grab a piece of toast, put some butter or jelly on top, and run to school. While on their way to school, they accidentally bump into someone (often a senpai) and make a mess of their shirt. After much fumbling and apologizing, the protagonist arrives at class... Typically late.

This sort of introduction scene is known as the way to start an anime.

Bread is a relatively new addition to the Japanese diet. As a result, in the early 1900s it, or more specifically toasted bread, was seen as a symbol food (similar to City People Eat Sushi). Even after bread had became a mainstream staple of Japanese cuisine, people took note of how quick and easy toast was to make and decided to run with the implications. Thus the infamous "running to school with toast in your mouth" Establishing Character Moment intro was born.

Rarely is the protagonist ever seen actually eating the bread. Maybe the bread was knocked out of their mouth during a Crash-Into Hello, or maybe we're just meant to assume she ate the bread off-screen.

This trope first appeared in 1970s Shoujo series. It eventually became so popular that it began appearing in Shonen, Seinen, Josei, and Kodomo works as well. This joke quickly became a Dead Horse Trope as a result of its popularity. Many guides on how to write an anime-inspired story even specifically note not to use this trope due to it being so incredibly overdone. As a result, most modern examples either lampshade, parody, or invoke the trope.

As part of her master plan to get her rivals' votes to be the center of the exhibition concert, Miruki pretends to be the clumsy late-to-school character, with the classic toast included.

As part of her master plan to get her rivals' votes to be the center of the exhibition concert, Miruki pretends to be the clumsy late-to-school character, with the classic toast included.