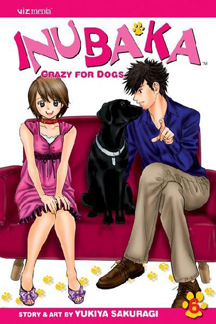 Inubaka: Crazy for Dogs is a seinen manga by Yukiya Sakuragi. It ran in Weekly Young Jump from 2004 to 2010.

Eighteen-year-old Suguri Miyauchi heads for the city to strike out on her own with only her loyal dog Lupin for company. But one fateful afternoon at a rest stop, she finds Lupin getting to know another dog a little better. The dog in question is Noa, a purebred Labrador on her way to be bred with another pure Lab, and Lupin's intrusion has ruined everything. To make up for it, Suguri offers herself as an employee to Noa's owner, Teppei Iida, who runs a pet shop called Woofles.

Suguri simply adores dogs and takes to her new job at once. However, it soon becomes apparent that she has an amazing way with dogs, almost enough to know exactly what they're thinking...

Inubaka is being developed into a live-action movie.

Should not be confused with Inuyasha.