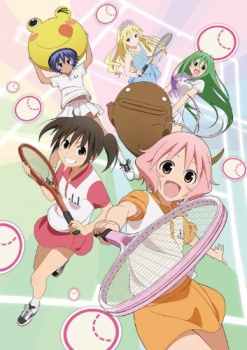 Asuna Harukaze, a second year middle school student, is a member of her school's soft tennis club. She's also a delusional dreamer. Along with her friend and foil Kotone Sawanatsu, the strange Kurusu Fuyukawa and the club's friendly big sister, Chitose Akiyama, they train every day to improve their tennis skills. Which they're going to need, because their skills have a lot of room to improve.

Softenni is a manga by Ryo Azuchi, which was serialized in Monthly Comic Blade from 2008 to 2011 and compiled into eight volumes. It was adapted into an anime in spring 2011.