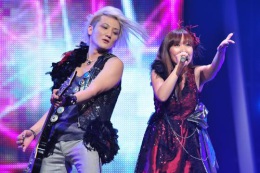 The band leaders, "atsuko" (singer) and "KATSU" (instrumentalist), began writing songs together in 1993 (according to the band's website). Originally, few or no other musicians were involved, requiring recordings to be assembled piecemeal with the use of computers and/or recording studios, and requiring backing tracks to be used during concerts. In 1999, they contributed the opening song and two image songs for the anime series Shin-Hakkenden, with a Warner Music sub-label releasing the opening song as the band's first single, and the image songs being sung by members of the show's voice cast and released on an image song compilation. Neither the show nor its music got much attention from the public (initially, at least). The band then departed that record label and spent the next 3-4 years recording music that they released as self-published CD-Rs / CDs. (Many of these early records, including their debut single, were produced only in small quantities, and have therefore become expensive collectors' items.)

Their major breakthrough occurred in 2003, when they both got four of their songs used as opening / ending themes for the anime series Stellvia of the Universe and began a new record deal with Starchild / King Records (which has continued up through the present). This was followed by several other inclusions on anime soundtracksnote and a new non-anime ones, too, with Fafner in the Azure: Dead Aggressor having become the series they're most associated with; all later parts of the Fafner franchise so far have featured their music. With the greater resources available to them from this point onwards, the band began to include more session musicians and more (non-digital) instruments in their recordings, and sometimes also in concert (reducing the amount of pre-recorded music needed for their concerts). In particular, they began holding a large-scale concert called "Music Wonder Great Circus" yearly in late December (the 2010 event was filmed and released on home video).

Their music gained some notice outside of Japan when Geneon released Stellvia and Fafner in North America. This led to angela's first three Starchild-era LPs getting published by Geneon in that part of the world, and to the band performing at three US/Canadian anime conventions (Otakon, Sakura-con, and CN Anime) during 2004-2005note albeit with a prerecorded backing track, and no backing band. However, that company's brief venture into the record business in America was a commercial failure (even more so than their DVD business was). The band's records since then have not been released outside Japan, though beginning in 2010 they've performed yearly at Anime Festival Asia in Singapore. Also, they appeared as one of the (many) musical acts at each of the Animelo Summer Live yearly events during 2008-2010 and in 2013.

Other works featuring music by angela: