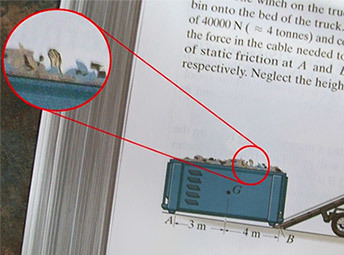 Help! I'm trapped in a dumpster that's trapped in a physics problem!
"It also has some daft bits in it to try and make the whole experience at least vaguely entertaining for you."
— CGP Books, Key Stage Two Science: The Important Bits
Advertisement:

Modern academic textbooks represent a curious duality. On the one hand, people expect them to be a clear, accurate and legitimate explication of the topics contained therein. It is expected that they are written by intelligent scholars with a clear grasp of the information, and the expected seriousness of the learning environment tends to lend an air of sobriety to the proceedings.

On the other hand, many intelligent people are snarky goofs, and one of the main target audiences for these books is the snarky goofs of tomorrow.

It is a bit of textbook prose, often appearing in the homework problems, that, while being entirely legitimate, suggests that the author doesn't mind a little breeziness in the discussion of the material, or at least recognizes the difficulty of immediate application of some of the concepts involved.

A variant of this trope involves jokes sneaked into original research papers.

Discovering one of these is almost guaranteed hilarity, and often subject to Memetic Mutation inside the classroom.

Problems will be left unanswered as an exercise for the reader.

Music
Physics
Psychology
Sociology
Multiple Studies
The Other Wiki
Other