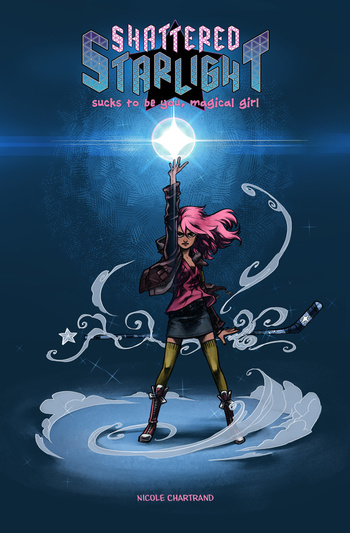 Sucks to be you, Magical Girl
Advertisement:

Farah Shaughnessy is a Magical Girl. Or rather, she was a magical girl. Now that she's a young woman things don't seem so magical anymore. Instead of saving Montreal from the forces of Chaos and Entropy, she’s just trying to hold down a decent job, pay her rent and get her life together a decade after the breakup of her team. When strange things start happening around her and old enemies start to reappear, Farah has to make a choice: face the things she’s been running from all these years or put down her astral weapon and walk away for good.

is an online graphic novel by Nicole Chartrand, the creator of Fey Winds. The author promises it will eventually explore mature themes as it deals with the oft-ignored implications and ramifications of common magical girl tropes, mainly how an adolescence spent fighting magical monsters would not be a good preparation for a successful adult life.

Tropes found in Shattered Starlight include: