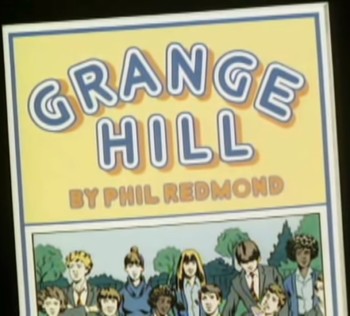 Title card used from 1978 to 1989
This children's Soap Opera ran on The BBC from 1978 to 2008. The series was set in the fictional school of the title in the fictional London borough of Northam, until 2003, when the entire school magically moved to Merseyside. It was eventually discontinued in 2008 after running 30 years.
Advertisement:

The original circus-beat theme tune continues to be used as the soundtrack to any appearance by school children or a class room, regardless of the fact that it was used for less than half of the 30-year run.

There was a game adaptation of it for the ZX Spectrum and Commodore 64, which sold poorly because Real Life offered the same gameplay options with vastly better graphics, but is notable for the following Have a Nice Death:

"You see a shifty man in a leather jacket. "Hey, son. Want to buy some of this?" The man offers you a packet of white powder. He is a pusher."

"There is an empty look in his eye as he snatches the money from your hand. His face is pale and drawn; his body thin and unfed. He steals to keep his habit; and makes addicts of children. He is dead, and soon you will be too."
Advertisement:

There is a fan site at: http://www.grangehillfans.co.uk/