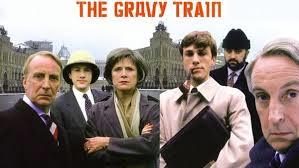 A 1990 miniseries by Malcom Bradbury, The Gravy Train follows the adventures of Dr Hans Joachim Dorfmann, a newly-appointed official in the European department of agriculture.

The Gravy Train provides examples of: