Tear Up the Contract 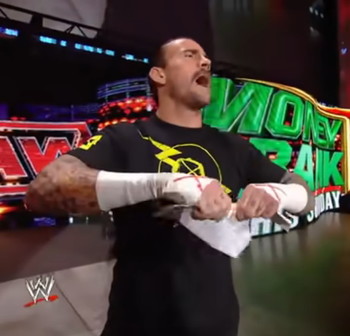 Do you know that contract you or a friend signed? Perhaps you didn't Read the Fine Print, or maybe you were forced into a Leonine Contract, or perhaps you just want to tell the other party to Take This Job and Shove It. Wouldn't it be nice to simply tear up the paper the contract is written on, and make everything go away?

If it's a Magically Binding Contract, that might work, or you might anger whatever it is that enforces such contracts.

In Real Life, however, destroying the paper does not magically nullify the agreement; the contract still exists, even if you Destroy the Evidence. It might just land you in jail, though. Of course, if there is no remaining evidence that the contract was ever signed, the other party may have trouble proving this in court. Just remember modern contracts are usually signed in triplicate.

If you're the one in the advantageous position, tearing up the contract may simply be a theatrical way of agreeing to let the other party out of of it.

If you haven't signed the contract yet, it's not in force yet, so tearing up the paper is equivalent to rejecting it. (And throwing away the option of signing it later, if the other party has already done so)

Physically ripping the paper is not required, but the trope is typically invoked in the form of Paper Destruction of Anger or Burn Baby Burn.

Similarly, attempting to destroy any type of legal document in order to make what it represents go away qualifies.

Gwen arrives to Camp Wawanakwa for the first time, and tears up the contract she signed in protest of the living conditions. Unfortunately for her, Chris has many copies.

Gwen arrives to Camp Wawanakwa for the first time, and tears up the contract she signed in protest of the living conditions. Unfortunately for her, Chris has many copies.