Hostility On The Set / Professional Wrestling 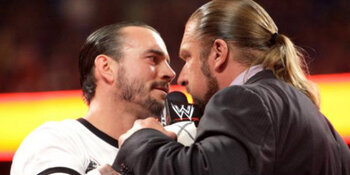 A major example of Real Life Writing the Plot
Advertisement:

Professional Wrestling is a dog-eat-dog business which attracts a lot of people whose egos make Axl Rose and the Gallagher brothers look like Ned Flanders. And when two egos clash for whatever reason (money, booking decisions, company hierarchy, botches...) hostility happens.