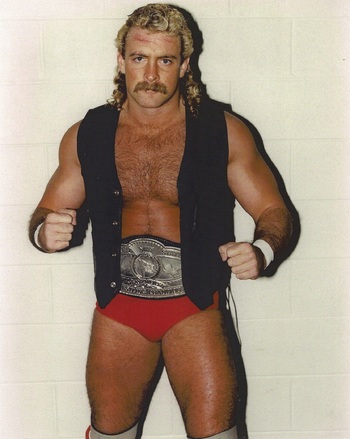 Terrance Wayne "Terry" Allen (born June 11, 1959) is an American retired professional wrestler, manager and commentator and from Chesapeake, VA who competed from 1978 to 1986 as Magnum T.A.

He debuted under his own name for the National Wrestling Alliance territories Championship Wrestling from Florida and Pacific Northwest Wrestling in Portland, Oregon, before switching to Mid-South, where he changed his name to Magnum T.A. He found his greatest success working for the NWA in Mid-Atlantic Championship Wrestling, until he was forced to retire after a car accident in October 1986. He worked as a commentator and managed Sting and Lex Luger to victory in the 1988 Jim Crockett Sr. Memorial Cup tag team tournament. He also worked in the WCW office until he left in the mid-1990s to return home to Virginia to work in telecommunications.