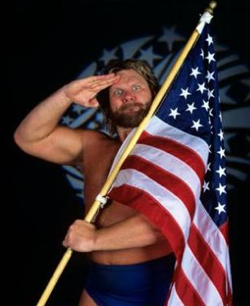 "HOOOOOOOOOOOOOOO!!!"
"As far as I can tell his character is an unfrozen caveman they tested the Captain America serum on."
—Noah Antwiler, The Spoony Experiment
Advertisement:

James Edward Duggan Jr. (born January 14, 1954), better known as "Hacksaw" Jim Duggan is a Ring Oldie who had his most memorable run in WWE in The '80s, known for his goofy demeanor and his relentless patriotism. He was rarely seen without an American flag in one hand and his trusty 2x4 in the other, and at one point wearing a crown to the ring after defeating King Haku in mid-1989.

While he never won any titles in WWE, he's still known as a major figure in the Rock & Wrestling era, with the distinction of winning the inaugural Royal Rumble. He also spent some time wrestling in WCW in The '90s, where he made his PPV debut at Fall Brawl '94 by beating "Stunning" Steve Austin for the WCW United States Heavyweight Title

in about 30 seconds, after Ricky "The Dragon" Steamboat had forfeited the belt to Austin due to a career-ending injury. He made a brief comeback to WWE several years later, and is still frequently seen on the independent circuit.

Nevertheless, he is a former 2x Mid-South

.note This is the same IWA Japan that hosted the King of the Death Match Tournament that Cactus Jack won on August 20, 1995.

In a rather funny and endearing way, he was also the former and last-ever NWA/WCW World Television Champion