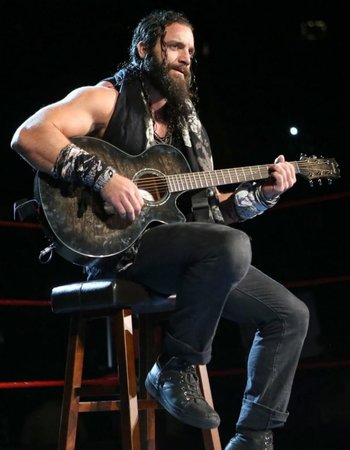 Walk. With. Elias.
"...so if you could just silence your cell phones, hold your applause until after I'm finished, and most importantly do me a favor and shut your mouths!"
Advertisement:

Jeffrey Daniel Sciullo (born November 20, 1987) is an American professional wrestler and musician currently signed to the WWE, where he performs under the ring name Ezekiel.

After the spending early years of his career wrestling in various independent promotions, he was signed to WWE's NXT brand as Elias Samson, where he made his television debut on April 24, 2014. In April of 2017, he was called up to the main roster, where he currently competes on the Raw brand. He is a four-time WWE 24/7 Champion.

"Who wants to trope with Elias?"