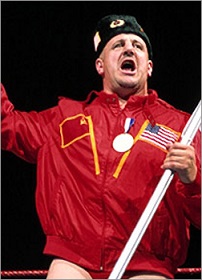 "Ladies and gentlemen, Mr. Volkoff requests that you all please rise and respect his singing of the Soviet national anthem."
— Howard Finkel standard announcement before every Volkoff match prior to his Heel–Face Turn. This was usually followed by Volkoff singing, with the fans booing and throwing garbage.
Advertisement:

Josip Nikolai Peruzović (October 14, 1947 - July 29, 2018) was a Croatian professional wrestler best known for his work in WWE in the 1980s as Nikolai Volkoff. He started his career in Canada in 1967 after having escaped from Yugoslavia. He was trained by Newton Tattrie and debuted as Bepo of the Tag Team the Mongols with Tattrie, who was known as Geeto. He also competed in the AWA as Boris Breznikov. He started the Volkoff role in the WWWF in the 1970s and took it to Mid-South, Florida, Mid-Atlantic, Georgia and other territories. His biggest career moment was most likely when he and The Iron Sheik defeated Barry Windham and Mike Rotunda for the WWE World Tag Team Titles

at the first WrestleMania in 1985. He turned face in 1990 after his team the Bolsheviks with Boris Zhukov was scrapped and sided with wrestling's resident All-American Face "Hacksaw" Jim Duggan. He was eventually pushed to the background until he left in January 1992. He would work for a variety of independents, including ECW, before returning to WWE in 1994 as an unwilling heel. (See Fallen-on-Hard-Times Job below.) Since leaving WWE, he has wrestled on and off for various independents for years. He was inducted into the WWE Hall of Fame in 2005.

"Ladies and gentlemen, Mr. Volkoff requests that you all please rise and respect the reading of his tropes":