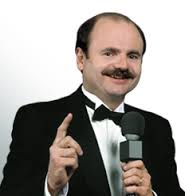 Howard Finkel (June 7, 1950 - April 16 2020) was an American Professional Wrestling ring announcer from New Jersey known for his long run with WWE. He would occasionally get involved in storylines, including taking a bribe from "The Million-Dollar Man" Ted DiBiase to let him take over as the guest ring announcer for the match where Mr. Perfect defeated WWE Intercontinental Heavyweight Champion

"The Texas Tornado" Kerry Von Erich. He was inducted into the WWE Hall of Fame in 2009 and The Wrestling Observer Newsletter Hall of Fame in 2018. Sadly, The Fink passed away on April 16 2020 at the age of 69.