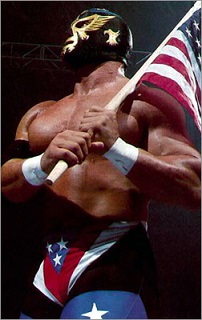 Del Wilkes (born December 21, 1961-July 1st 2021) was an American Professional Wrestler from Columbia, SC best known for his work from the late 1980s until the mid 1990s as The Trooper and The Patriot. He debuted in 1988 and teamed with a young Scott Steiner as the Wrestling Machines in Memphis, before leaving for the American Wrestling Association. In 1990, he and DJ Peterson became the final AWA World Tag Team Champions

. He changed his gimmick to the Patriot and would compete for the GWF in Dallas, for the UWA in Mexico and for All Japan Pro Wrestling from 1991 to 1994. He debuted in WCW in 1994 and he and Marcus Bagwell would hold the WCW World Tag Team Titles

as Stars and Stripes, defeating Pretty Wonderful (Pauls Roma and Orndorff) for the belts on WCW Saturday Night in September before losing them back a month later at WCW Halloween Havoc. They regained the belts in November at Clash of the Champions XXIX before losing them three weeks later to Harlem Heat (Booker T and Stevie Ray). He stayed with WCW until he left in mid-1995 to go back to AJPW, where he stayed for the next two years. In 1997, he signed with WWE and joined the fight alongside "Stone Cold" Steve Austin and Ken Shamrock against the Hart Foundation, until he suffered a torn triceps muscle, leading to the returning Steve Blackman taking his place on Team USA (Vader/Goldust/Marc Mero) at Survivor Series 97. He was released in early 1998 and retired soon after.