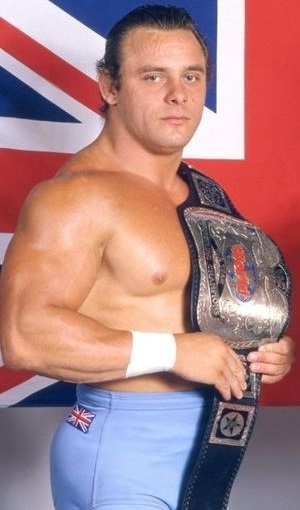 Thomas "Tom" Billington (5 December 1958 – 5 December 2018) was a British professional wrestler, best known by the ring name the Dynamite Kid. He started his career in England in the late 1970s and would then catch on with Stampede Wrestling. He then went on to New Japan Pro-Wrestling where he had a classic series with the original Tiger Mask. He also competed in NWA Pacific Northwest Wrestling in Portland, OR. In 1984, he debuted in WWE teaming with Bret Hart. After his cousin Davey Boy Smith arrived, he and Dynamite were teamed together as the British Bulldogs. They would defeat the Dream Team (Greg "The Hammer" Valentine and Brutus Beefcake) for the WWE World Tag Team Titles

in the main event of the Chicago stage of WrestleMania 2. Unfortunately, Dynamite suffered a major back injury in December 1986 in a match against Don Muraco and "Cowboy" Bob Orton Jr. This led to the Bulldogs losing the belts to the Hart Foundation (Bret and Jim "The Anvil" Neidhart.) Dynamite left WWE after Survivor Series 88 and would go on to have runs in Stampede, All Japan Pro Wrestling, and Michinoku Pro Wrestling before finally retiring in 1996. Along with the one WWE World Tag Team Title reign, he was a 1x New Japan WWF World Junior Heavyweight Champion,

and a 1x All Japan All Asia Tag Team Champion.