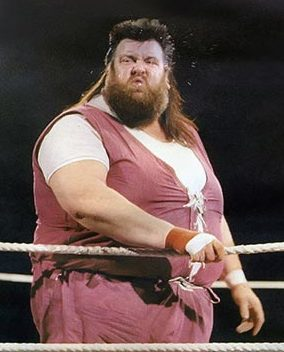 Martin Austin Ruane (10 October 1946 – 29 November 1998) was a British Professional Wrestler and actor best known as Giant Haystacks or Loch Ness. He debuted in 1967 as Luke McMasters and was also billed as Haystacks Calhoun, taken from the American wrestler with the same name. This was changed to Giant Haystacks. He competed primarily as a Monster Heel, for obvious reasons. He was a huge star and a major ratings draw on ITV. He also competed as Loch Ness for Stampede and had a brief, aborted run in WCW in February-March 1996. He died of cancer in 1998. He was a 1x British Heavyweight Champion

with the Dynamite Kid.