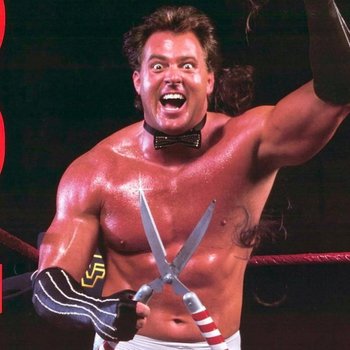 The Barber — his most successful gimmick among many
Advertisement:

Edward Harrison Leslie (born April 21, 1957) is a retired American professional wrestler from San Francisco, California best known for his work in WWE in the 1980s as Brutus Beefcake. He debuted in 1977 as "Dizzy" Ed Boulder and teamed with Hulk Hogan (then Terry Boulder) in Florida and Alabama. He also worked for "Cowboy" Bill Watts' Mid-South Wrestling, the AWA, and made some early appearances in WWE. He officially debuted in WWE as Brutus Beefcake in 1984. He and Greg "The Hammer" Valentine defeated the U.S. Express (Barry Windham and Mike Rotunda) for the WWE World Tag Team Titles

on August 24, 1985, and lost them to the British Bulldogs (Dynamite Kid and Davey Boy Smith) in the main event of the Chicago stage of WrestleMania II. Beefcake turned face by cutting "Adorable" Adrian Adonis' hair at WrestleMania III, launching his "Barber" gimmick. In 1990, he was originally scheduled to defeat Mr. Perfect for the WWE Intercontinental Heavyweight Title

at SummerSlam, but he suffered a near-fatal facial injury in a parasailing accident, destroying all the momentum he had. He didn't return to the ring until 1993, making his last televised appearance in the MegaManiacs (Hogan/Beefcake)-Money Inc. ("The Million Dollar Man" Ted DiBiase/Irwin R. Schyster [Rotunda]) match at WrestleMania IX. He followed Hogan to WCW in 1994, where he became known more for going through a LOT of different names and gimmicks, lasting until 1999. In the years since, he has worked for a variety of independent promotions, often teaming with Valentine.

He was inducted into the WWE Hall of Fame in 2019.

"These tropes are going to do a little cuttin' and a struttin'":