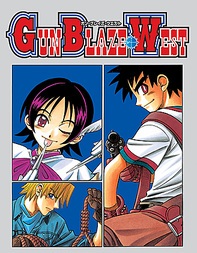 Best short description: One Piece in the wild west. But that's a bit of a stretch. So here's a better description.

Gun Blaze West was the next mainstream manga from Nobuhiro Watsuki coming after Rurouni Kenshin in 2001. Set in the 19th century America, it tells the story of Viu Bannes on his quest to locate Gun Blaze West, a rumored place where only the roughest and toughest outlaws and cowboys dare to tread. The thing of it is though it's very well hidden, and artifacts dubbed "Sign To West" are the only known objects to point the way. Luckily Viu has one of them (his prized gun from his mentor), and is more than willing to risk life and limb to reach the legendary destination. Along the way he is joined by two more allies: Will Johnston, a former bar bouncer who father left him a compass with the sign and Colice Satoh, a Japanese foreigner, acrobat and keen eyed knife thrower from a traveling circus. Together they brave the wild frontier, confronting other desperadoes who seek the same goal.

An interesting wild west manga and one of the few that was actually set in America (a very rare main setting indeed in manga, let alone in the past) and depicted the 19th century very well. Sadly, it never caught on with its readers and was soon canceled within the year it began (six months to be exact resulting in three volumes of material). Still a very good shonen title while it lasted.

This manga provide the following tropes: