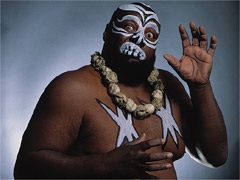 James Arthur Harris (May 28, 1950 – August 9, 2020) was an American professional wrestler from Senatobia, Mississippi best known for his work in the 1980s and 1990s as Kamala. His gimmick was of an Ugandan "savage" (and was in fact nicknamed "The Ugandan Giant"). He competed primarily in Memphis, in World Class Championship Wrestling in Dallas, Texas, in Mid-South Wrestling (Louisiana/Oklahoma), in the American Wrestling Association and for WWE. He made his PPV debut at SummerSlam '92 against The Undertaker. He was a four-time USWA (Memphis) Unified World Heavyweight Champion

. His last run with a major promotion was as a member of the Dungeon of Doom in WCW from June through October 1995. He also competed for All Japan Pro Wrestling, Juggalo Championship Wrestling, various National Wrestling Alliance territories, W*ING, Ring of Honor and many independent promotions, including defeating Ring of Honor/CHIKARA regular "Sweet 'N Sour" Larry Sweeney at a Women Superstars Uncensored event, WSU Ultimate Impact Phase 2 on May 18, 2007, when the promotion was still known as Wrestling Superstars Uncensored. He was inducted into the Texas Wrestling Hall of Fame in 2012.

He held the distinction of being one of the few wrestlers who slammed André the Giant before Hulk Hogan did it at WrestleMania 3.

A hypertension, diabetes and COVID combo cut his life short, passing away at 70.