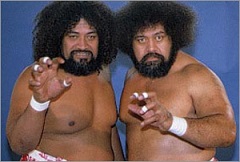 Arthur "Afa" Anoaʻi and Leati Sika Anoa'i Amituana'i are a former Professional Wrestling Tag Team as The Wild Samoans. They started in the old San Francisco territory and worked all over the world, achieving their greatest fame in WWE. Among their in-ring achievements, they are former 3x WWE World Tag Team Champions

The Wild Samoans are the Trope Namers for: