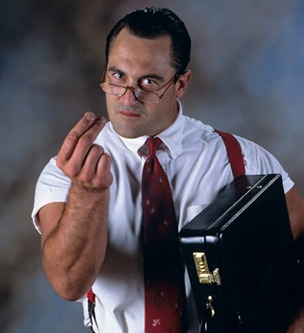 Lawrence Michael Rotunda (born March 30, 1958) is a retired American Professional Wrestler from Syracuse, NY best known for his work in the 1980s and 1990s as Mike Rotunda and as Irwin R. Schyster. He debuted in 1981 in Florida teaming with brother-in-law Barry Windham. They went up to WWE in 1984 as the U.S. Express. They had two runs with the WWE World Tag Team Titles

before they went back to Florida. After National Wrestling Alliance promoter Jim Crockett shut down Florida in 1987, Rotunda was brought up to the Carolinas. He turned heel and joined Kevin Sullivan's Jerk Jock Power Stable The Varsity Club. After that ran its course, he was briefly known as "Captain" Mike Rotunda, a sailor gimmick. At Clash of the Champions XIII, he announced that he had inherited a large amount of money and that his new name was Michael Wallstreet. He introduced his new manager Alexandra York (Terri Runnels), launching the York Foundation gimmick. He left WCW in 1991 to go back to WWE to become Irwin R. Schyster. He and "The Million-Dollar Man" Ted DiBiase would team up as Money Inc. and have three runs with the WWE World Tag Team Titles. Rotunda eventually sank into the midcard before going back to WCW in September 1995. He was first renamed V.K. Wallstreet (see Take That! below) before going back to the Michael Wallstreet name. He joined the nWo during a big brawl at the end of the December 16, 1996 WCW Monday Nitro. Due to some issue with his nWo contract, he was shipped off to New Japan Pro-Wrestling until Starrcade in December 1999, when the Varsity Club (Sullivan, Rotunda and Rick Steiner) were reunited to team with "Hacksaw" Jim Duggan in a losing effort against the Revolution (Shane Douglas, Dean Malenko, Perry Saturn and Asya). After that run ended in early 2000, Rotunda went to All Japan Pro Wrestling, where he finished out his career, retiring in 2004. He then worked for WWE as a backstage official until 2020.

"Read these tropes, you tax cheats!":