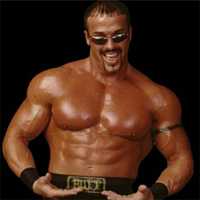 Marcus Alexander Bagwell (born January 10, 1970) is an American Professional Wrestler from Marietta, Georgia who is best known for his work in WCW from 1991-2001. Debuting in 1990 and working for the Texas-based Global Wrestling Federation (GWF) promotion in 1991, Bagwell joined WCW in November of that year. During his early years, he served as a prolific tag team specialist, forming alliances with 2 Cold Scorpio, The Patriot (as Stars and Stripes), and Scotty Riggs (as the American Males) with each earning him 4 WCW Tag Team Championship

victories (two with the Patriot).

In 1996, he would join the New World Order as Buff Bagwell and form the tag team, Vicious and Delicious with Scott Norton. As the nWo's influence would spread to New Japan Pro-Wrestling, nWo Japan was formed that December with them joining them a month later. After the team returned from Japan to WCW, Bagwell became a mid-card player in the company feuding with Lex Luger before suffering a frightening neck injury in April of 1998 that kept him out of action until October of that year. Even during that time, he managed to trick Rick Steiner into a trap along with fellow nWo and Rick’s brother Scott Steiner.

During the same period he tried his hand at acting, appearing in two different Andy Sidaris movies.

In 1999, Bagwell peaked in the group as part of the nWo Elite before getting kicked out in March after accidentally costing Scott Steiner his match in WCW Uncensored. In the final years of WCW, Bagwell won tag gold once more with Shane Douglas as part of the New Blood stable, had to worry about the safety of his mother, Judy, when he wasn’t feuding with her, and aligned himself with Luger to form Totally Buff.

When WWE bought out WCW in 2001, he was one of the wrestlers that took part in The In Vasion Angle only to be let go by WWE months later in a complicated set of circumstances. Afterwards, Bagwell made sporadic appearances TNA and has done primary independent wrestling shows since.