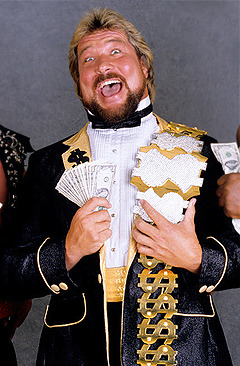 Listen up, you nickel-and-dime peons: "The Million Dollar Man" Theodore Marvin DiBiase Sr. (born January 18, 1954) is a retired professional wrestler. He was one of the premier Heels in the "federation years" of the WWE. He was inducted into WWE's Hall of Fame in 2010, and has since been keeping a watchful eye over his son Ted DiBiase Jr. in his WWE run. He is a 3x WWE World Tag Team Champion

also with Hansen, and held various territorial titles in the late 1970s and through most of the 1980s before arriving in WWE in 1987.note He also briefly held the WWE 24/7 Title on the RAW Reunion show in 2019, buying it off Alundra Blayze before losing it back to Drake Maverick.

"Every man has his trope":