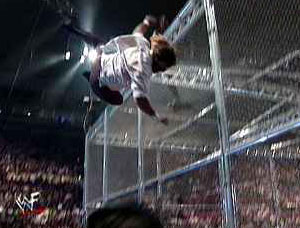 The Undertaker makes Mick Foley famous.
Hulk Hogan, three years into his reign as WWF World Champion, bodyslams and leg drops the 520lb André the Giant at WrestleMania III in front of 93,173 screaming fans to beat him, ending Andre's 15 year undefeated streak. The force of the slam is so powerful it ret-cons all of wrestling history, changing it so that Bodyslam to Andre became to wrestling what the Big Bang was to our entire universe.
— Taimapedia
Advertisement:
THIS IS AWE-SOME! (clap clap clap-clap-clap)
THIS IS AWE-SOME! (clap clap clap-clap-clap)
— A sure signs that you're witnessing a CMOA taking place Tonight in This Very Ring

Professional Wrestling is all about the spectacle. Of course, there are certain points that will be really remembered by long-time fans. Five-star matches, one might say.

It would be ill-advised to link to unofficial WWE videos from YouTube, as WWE is vigilant on its copyright.