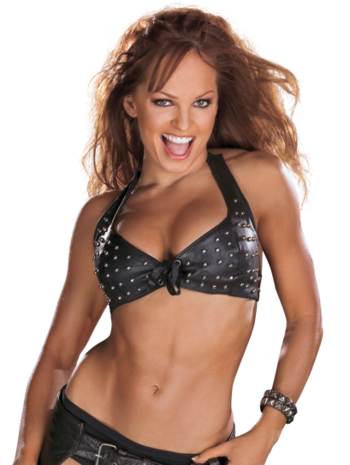 Christina Lee "Christy" Hemme (born October 28, 1980) is an American professional wrestling valet, ring announcer, and retired professional wrestler and model. She is known for her time in WWE as a WWE Diva and was the winner of the 2004 WWE Diva Search, receiving $250,000 and a one-year contract with the company.

Hemme began her WWE career as a member of the Raw roster. After a brief feud with Carmella DeCesare, the runner-up of the Diva Search, Hemme feuded with WWE Women's Champion Trish Stratus and Victoria, who were ostensibly jealous of the opportunities afforded to Hemme by the Diva Search. The feud with Stratus led to Hemme challenging for the Women's Championship at WrestleMania 21, but was unsucessful. After being traded to the SmackDown! brand in the WWE Draft, Hemme feuded with Melina, and became the valet of the 2005 incarnation of the Legion of Doom (the one with Heindereich). On November, Hemme was sent to WWE's developmental territory Ohio Valley Wrestling (OVW), but on December 5, Hemme was released from her WWE contract.

Hemme signed with TNA in April 2006. As a heel, she entered into a feud with the Voodoo Kin Mafia that saw Hemme manage several tag teams to face them, but the VKM defeated all of them. Afterwards, Hemme became the girlfriend of Lance Hoyt, who in turn formed a partnership with Jimmy Rave, dubbed The Rock 'n' Rave Infection; with time, they adopted a gimmick of portraying a rock band, with Hemme as their frontwoman. After quietly leaving the team, Hemme became a face, feuding with The Beautiful People and even challenging Awesome Kong for the TNA Knockouts Championship, before announcing her retirement from in-ring competition on December 2009. She served as a ring announcer and backstage interviewer until departing from TNA in 2016.