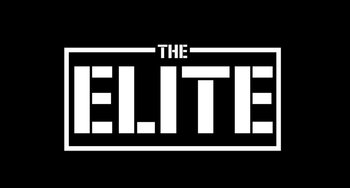 The Elite is a professional wrestling faction containing several key members and associated with three acts: Bullet Club (from which they spawned), Being the Elite (their webshow), and All Elite Wrestling (the wrestling promotion they founded and help run as Executive Vice Presidents).

Born in 2016 out of a creative partnership both in the ring and behind the scenes between Kenny Omega and The Young Bucks in their days in New Japan Pro-Wrestling, The Elite bills itself as being a true representation of their name: the best of the best of pro wrestling put together. And going by their meteoric rise in popularity both in Japan and in the US, they might be right.

Their origins stem from the likewise incredibly popular NJPW faction Bullet Club, when the aforementioned Kenny Omega and Young Bucks turned against faction leader AJ Styles (and likely prefaced by The Young Bucks' earlier turn against founder Prince Devitt), announced themselves as "The Elite" and usurped leadership of the Club, starting what's commonly known as "The Elite Era", during which they also recruited members Cody Rhodes, Marty Scurll and Adam Page. Thinking The Elite as spotlight thieves who were propping themselves up at the expense of the remainder of the Bullet Club, there was a civil war in Bullet Club between The Elite and the non-Elite members, where the latter proclaimed themselves the "OGs" of the Bullet Club. The result was The Elite wholly splitting off and striking out on their own in 2018.

During their time as free agents they set the indie scene ablaze, culminating in their primary role in historically massive Indie PPV event All In, one of the biggest ever non-WWE PPVs in North America. The huge success of this led to the birth of the (aptly-named) All Elite Wrestling, the greatest North American rival to WWE's hegemony since the days of the WCW, in which The Elite acts as Vice-Executives in charge alongside owner Tony Khan. During its first year, Adam Page and Kenny Omega won the AEW World Tag Team Championship, conquering the first AEW belts for The Elite, with Cody Rhodes becoming the inaugural AEW TNT Champion a few months thereafter, and Kenny Omega becoming the third AEW World Champion later that year.

Since becoming internationally known, the Elite has gone through a few different variations and incarnations as they've invited various new members and associates into their ranks. They've partnered with Kota Ibushi (Kenny Omega's partner in the famed "Golden☆Lovers" tag team) to become the "Golden☆Elite", they've teamed with their old Bullet Club stablemates Doc Gallows and Karl Anderson to become the "Super Elite", and they've teamed with Bobby Fish and Kyle O'Reilly of The Undisputed Era to become the "The Undisputed Elite".

And in a rather amusing footnote: Kenny Omega and the Young Bucks are (as of this writing) the only non-WWE wrestlers who have their own Funko Pop! figurines.

Barring their internal conflict keeping them from dominating the world, The Elite is..well...elite.