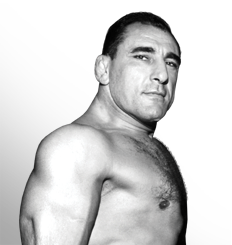 Trained by the Polish strongman Stanislaus Zbyszko in Argentina, Antonino Biasetton (13 April 1921 – 15 March 1977) was an Italian-Argentinian Professional Wrestler who competed from 1942-1976 as Antonino Rocca. He is best known for his work for the Capital Wrestling Corporation, which was the precursor to WWE. He was a major box office draw for the New York City territory. He also competed in Montreal, Ohio, Texas, New Japan Pro-Wrestling and the World Wrestling Council in Puerto Rico, where he finished out his career. Among his in-ring achievements, he was a 1x World (Capitol) Tag Team Champion, a 1x World (Montreal) Heavyweight Champion

He was posthumously inducted into the WWE Hall of Fame in 1995.