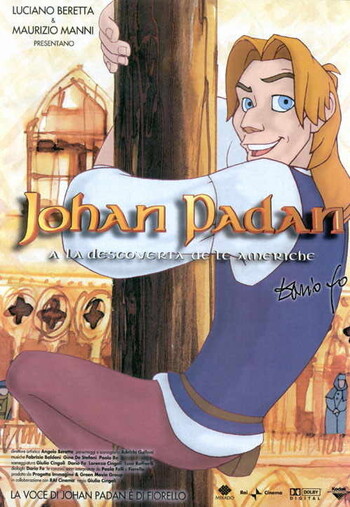 An Italian animated movie about Exactly What It Says on the Tin: a Lovable Rogue who must flee from Venice ends up on America at the time of The Conquest. Hilarity (and danger) ensues.

Done in the style of a Disney Film (from the animation to musical numbers) despite covering some pretty serious subjects, such as slavery.

Johan is a young rogue who is told by a Gypsy seer that he is the "Son of the Moon". She teaches him that when clouds surround the Moon, it is an omen of danger. When she gets arrested for "witchcraft" Johan flees to Spain and ends up on a ship bound for the New World by accident.

On the boat, he befriends a huge Spaniard nicknamed 'Triple Fat'. Both are washed away by a storm to Florida, where they are captured by a tribe of Native Americans.

Luckily for them, this tribe has never seen a White Man before, much less have any idea of the pillaging and enslavement heading their way. When Johan saves the Chief's life (using the Seer's advice) they make him their shaman. But when the conquistadors arrive, he must decide whose side to take.

This film has been translated into both English and Spanish.