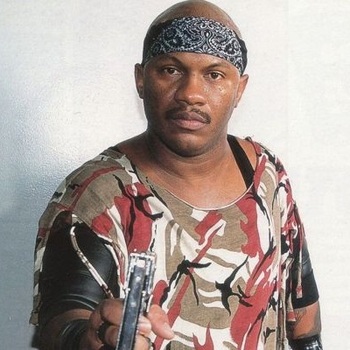 The Original Gangsta.
"Like his wrestling style or not, you have to respect a guy like New Jack, who has stabbed people in the ring and, from his past career as a bounty hunter, allegedly has several justifiable homicides to his name. Wait, is 'respect' the word I'm looking for?"
—WrestleCrap, "HardCORE Justice – The One Night Stand We'd All Regret the Next Morning"

Jerome Young (January 3, 1963 – May 14, 2021), better known as New Jack, was an American Professional Wrestler from Atlanta, GA. He is said to have been a bounty hunter before becoming a professional wrestler, though this has not been confirmed or denied. He debuted in 1992 in the North Georgia Wrestling Alliance and the USWA in Memphis, TN., but didn't make his name until joining Smoky Mountain Wrestling as a member of the tag team the Gangstas (with Mustafa Saied) in 1994. Their original gimmick was of two militant black men from South Central Los Angeles... in a territory (eastern Tennessee) with an almost entirely white audience, sucka!

The Gangstas then went on to ECW in mid-1995 in Philadelphia, where they eventually dropped the race angle and focused on the other half of their gimmick: Taking people apart. This being the mid-nineties, they also turned face.

New Jack has been at the centre of some truly stomach-churning incidents in wrestling, such as: the Mass Transit Incident where he mangled Eric Kulas, a teenager who managed to get into a tag team match involving New Jack by lying about his age and falsely claiming he was a trained wrestler; the ECW Living Dangerously 2000 accident (a.k.a. the Danbury Fall) where he and Vic Grimes botched a stunt and fell 20 ft onto concrete;note With New Jack shooting brain fluid out his nose and losing sight in one eye. a 2003 match with one Gypsy Joe that devolved into a real-life brawl when Joe refused to sell Jack's moves (bad idea); and, in 2004

, shanking another wrestler in the middle of a match for "stiff shot"-ing him (ie. hitting him too hard, rather than fake-hard)... and the list goes on. He also claims that WWE Diva Tammy Lynn Sytch approached him to help assassinate her boyfriend, amongst other lurid stories.

He has also competed in XPW, TNA, CZW, IWA Mid-South and several other promotions. He is a 1x SMW Tag Team Champion

with Mustafa and a 3x ECW World Tag Team Champion

, holding the belts twice with Mustafa and once with former enemy John Kronus of The Eliminators.